“I think the pandemic showed me how absolutely fragile everything is, and it's all falling apart, like in our industry,” said Mariela Camacho.

Before the pandemic upended everyone’s life in 2020, Camacho was looking for a retail space for her bakery, Comadre Panadería. But as the story goes, she had to shift her business model like most business owners did during those early months to prevent the spread of COVID-19. She offered her pan dulce made with organic ingredients through weekend deliveries in Austin and San Antonio.

“It took a lot of work, but we did it, because we knew people weren't going to leave their house,” Camacho said in a recent phone interview with Luz Media. “We realize that if we want to generate income through this tiny business, we have to go out of our way and do things that aren't really very profitable.” 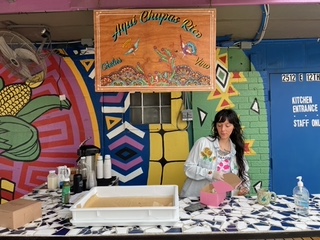 Luz previously reported that a survey from The American Association of University Women (AAUA) revealed the devastating economic, social and health repercussions that Latinas faced during the pandemic. A third of the Latinas surveyed lost their jobs or had their hours reduced. While the Latina pay gap has always been grossly unbalanced, it has become even worse as the gap decreased from 57 cents to a white man's dollar in 2020 to 49 cents in 2022. This is also in addition to a Stanford Latino Entrepreneurship Initiative survey that showed that Latino-owned businesses had their PPP loans approved at half the rate of white-owned businesses in 2020.

Camacho previously told Luz that she didn’t apply for a Paycheck Protection Program (PPP) loan, but she did receive $1,000 from the $10,000 she requested for the Economic Injury Disaster Loan. She didn’t think she qualified for the PPP loan, but after talking to some of her friends and doing some research, she eventually applied and received funds that provided a bit more financial cushion.

“It was quite a process. I personally struggled with it a lot,” said Camacho. “There was a lot of language that I didn't understand.”

As businesses reopened and vaccines were distributed, a “new normal” emerged. Camacho would occasionally sell her food at pop-ups, depending on the state of the pandemic, but she has primarily adapted to a pre-ordering system. Each week, customers can place an online order on Tuesday from an evolving weekly menu that can include conchas (brioche bread topped with a cookie shell resembling a seashell) or pink cake (corn cake with pink frosting) along with some vegan and gluten-free options. The orders can then be picked up on Saturday or Sunday morning at Nixta Taqueria in East Austin. 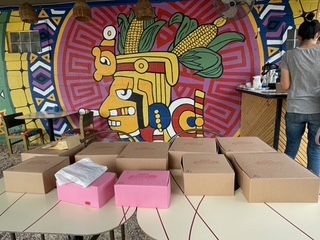 This has made the chef’s life easier because she knows how many items to make each week. Sometimes there are extra pastries available to purchase for walk-ups on Sunday morning, but if you’re in the area and looking to pick up some of her delicacies, a word of advice is to arrive as early as possible as she does sell out. She promotes her business through her website and social media, but it’s primarily through word of mouth. Some of the customers from her deliveries still order with her, with some occasionally making the trip from San Antonio to Austin.

“I feel like so much of it has come from just people believing in the foods that we're making,” said Camacho.

And one thing Camacho has learned through this pandemic is the importance of community.

“I am personally very introverted. I need a lot of quiet time,” said Camacho. “I really like being alone, but I 100% believe that our future is community based. We need to work together. We can't do this alone. So I think it's really important to build those relationships with people in your community.”

Camacho met the owners of Nixta, Sara Mardanbigi and Chef Edgar Rico, when she would eat there with her partner, and they eventually became friends. Mardanbigi and Rico, who was recently announced as a James Beard Award finalist, offered their space for Camacho to distribute her orders before the restaurant opens on the weekends. 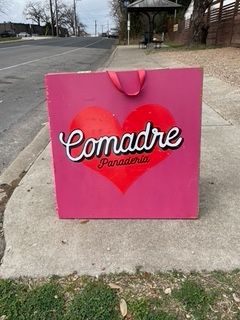 “There was so much generosity on their part and they genuinely believe in what I'm doing,” said Camacho.

The owners of Nixta also host pop-ups with other businesses. Most recently, they celebrated Nowruz, the Persian New Year, on March 20, as the city settled down from the annual South by Southwest festival. Camacho collaborated with her friend Nora El Hassouni of Masa Ruda with a special menu filled with almonds, pistachios, pomegranate, and yogurt to mark the occasion.

This August will mark four years of Camacho running Comadre Panadería full-time. She is still looking for a retail space as she did before the country went into lockdown in 2020, but her approach for that has changed.

“I have more of a co-op mindset for a kitchen space,” said Camacho. “I just think how great would it be for these small businesses or small food operations to be able to have a space where they could actually afford the rent and be able to generate some income for themselves or their family?” 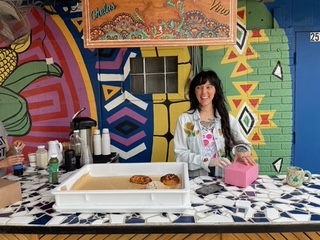 The city of Austin has seen an increase in commercial real estate in addition to its housing market, especially in the last year. According to a CBRE Survey, Austin became a top target for investors in 2021 due to its strong job and population growth. However, as the property becomes more valuable, those values increase, which affects smaller businesses like Comadre Panadería.

“How are we gonna buy a $2 million building in a very wealthy city like Austin? I have no idea,” said Camacho. “It's working that part out.”

In the meantime, Camacho will continue to sell her baked goods through the pre-ordering system on her website and the occasional pop-up.

“I'm not super rich, or have a lot of power, or anything like that, but I do have independence,” said Camacho. “And I do have control of what choices I get to make and do things that I believe in.”

From Your Site Articles
Related Articles Around the Web
Have you Discovered the Luz Community Yet?
Thinking about traveling, starting a new workout plan, or building your professional skills? We've got it all.
Check Out Our Workshops
Looking to feed your mind, body, and soul?
We've Got the Guide for You
Want to join a community with women just like you? We're covering everything from spirituality, to careers, to dismantling machismo.
Register for Free Today!