Sylvia Rivera is a name you may have heard before, especially around Pride Month. Rivera is best known for her participation in the Stonewall Uprising, but the legacy she left behind for the transgender community in terms of her advocacy is a true testament to the fantastic nature of her work.

Rivera was born in 1951 with her gender assigned male at birth with the name Ray given to her by her Puerto Rican father and Venezuelan mother. Rivera was born in the Bronx to a tough childhood - one so hard that the young Rivera ended up being raised by her grandmother after her father walked out and her mother committed suicide when she was only three years old. Rivera always held an active interest in women’s clothing and makeup and often did not shy away from opportunities to express herself. This made Rivera a target for bullies, which ultimately led to her running away from home at just 11 years old.

Rivera was then exploited sexually to make ends meet for herself, working as an underage sex worker in Times Square. Just one year after being out on the streets, Rivera met another prominent activist and self-proclaimed transvestite and drag queen Marsha P. Johnson, where her point of view broadened. During this time, Rivera became immersed in the plight of Black liberation, poverty, homelessness, and the rights of the transgender community.

In a time when the mainstream LGBTQ+ community was fighting for their rights, the trans members of that community were not welcomed by organizers. Many gay rights organizers, such as those from The Mattachine Society and Daughters of Bilities (two of the original gay and lesbian rights groups), discouraged members from “engaging in deviant expressions of gender and sexuality” and had strict dress codes for their rallies in the 1960s.

Johnson and Rivera then formed the Street Transvestite Action Revolutionaries (STAR) in 1971. This organization was dedicated to furthering the quality of life of the transgender community, providing housing for those in dire need. Johnson and Rivera worked tirelessly as sex workers at night to pay the rent and provide housing as well as security to transgender street youth and transgender homeless people that they felt were being actively excluded by gay rights groups. Though it was short-lived, they did a lot in those short years until the mid-1970s when STAR House closed. 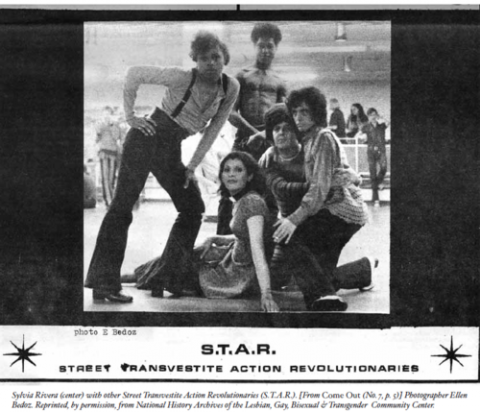 Her community not only as a woman of color but also as a trans woman of color. 17-year-old Rivera was an avid participant in the Stonewall Uprising, going on record to set the story straight of her role in the protest. Though she didn’t throw the initial Molotov cocktail, she “threw the second one.” In the six days of protests, Rivera never went home, staying behind and advocating for trans rights amidst the chaos.

Though others largely silenced Rivera in her community, she was invited to participate in the 1973 Gay Pride Rally in New York City. The ever-brave Rivera (though not allowed to speak by organizers) grabbed the mic and proclaimed, “I have lost my job, I have lost my apartment for gay liberation, and y’all treat me this way?” Despite being viciously booed off stage at the time, an experience that led her to attempt suicide and subsequent break from the city and activism until Johnson’s death in 1992, Rivera’s speech remains a powerful testament to the contributions and sacrifices she made to the gay rights movement.

Rivera passed away in 2002, but in dedicating almost her entire life to the gay rights movement has always served as a monumental figure that worked to change the tide to put the “T” in the LGBTQ+ movement it is known to be today. Without Sylvia Rivera, a lot of the transgender community would not have the progress they have today, making her an immortal icon to all.

This meant that in a world already so unwelcome, Rivera fought to make space for herself and her community not only as a woman of color but also as a trans woman of color.